Can't find the answer you're looking for?
Contact Support

Can't find the answer you're looking for?
Contact Support
Contents

There is currently a battle taking place over 340 acre expanse of green, forested land in southwest Atlanta. This land is known colloquially as the “prison farm,” due to a history of prisoners forced to work on a farm there. While this issue is nuanced, involving race, police, corporate interests, and land development; part of the conflict involves environmental science. The goal of this article is to weigh-in on behalf of unbiased science, and Science for Georgia itself does not stand with any political party nor do we hold a stance on police funding or business interests. However, to communicate this environmental issue without summarizing the related conflicts would be an insult to the communities directly affected by the fate of this forest.

**Update: On Aug 10, the Atlanta City Council voted 6-0 to lease only 85 acres to the Atlanta Police Foundation. And mandated that 265 acres be preserved as greenspace.

The present conflict in Southeast Atlanta

190 acres (now 125) of forested land are slated to be turned into a movie soundstage and police training facility
There is a 340 acre expanse of green, forested land in south Atlanta known as the “prison farm.” Of this, a 140 acre portion is designated “Intrenchment Creek Park.”  Portions of Intrenchment Creek Park are slated for development into a public safety training academy (85 acres 150 acres) and a large movie soundstage for Blackhall Studios (40 acres). Blackhall Studios recently cleared a broad section of forest in their property nearby, but it was deemed unfit for construction. So they are swapping that land with DeKalb county in return for a new set of acres from Intrenchment Creek Park. 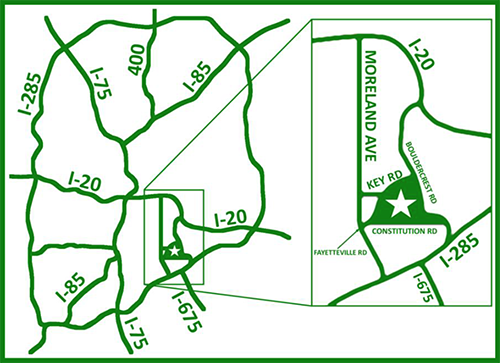 The city of Atlanta has been encountering opposition from locals hoping to protect the forest, worrying about the gentrification arising from the expanding movie industry, and those hoping to see the mayor follow through on the promises made last June to reduce police funding (or at least to reinvest in evidence-based, non-combative, police training). A number of local groups including “Stop the Swap”, “Save the Old Atlanta Prison Farm” and a decentralized coalition “Defend the Atlanta Forest” (@defendatlantaforest) have been rallying against these changes to the urban landscape. A lawsuit has been filed against the swap.

In response, a local group initially titled “The Great Park Connection” before recently rebranding themselves to become “The Great Park Conservancy”, has created a website and begun advocating to support the landswap with Dekalb county and to claim benefits of additional development and forest reduction. This has managed to sway a number of residents in proximity to the Intrenchment Creek Park to support the landswap. However, this group is run by Ryan Millsap, formerly the majority owner and CEO of Blackhall Studios. This constitutes a significant bias, and therefore the content presented in the website is scientifically unreliable. When discussing science, it is best to make sure that information on a topic is verified by those who are independent from the situation.

Given the haste at which these proposals were put together, Science for Georgia recommends no clearing or development until proper study and public comment period can occur.

Interview with an Ecologist

To get a less biased perspective, Science for Georgia interviewed local ecologist Kate Carson. Carson is the founder of ReForest ATL, a women-owned workers collective, has 18 years of experience in restoration ecology, and knows a lot about the impacts of large scale development and the difficulties in reversing environmental damage.

What has already happened on the land cleared by Blackhall Studios?

In the land deemed unfit for construction, the action of Blackhall Studios was to clear-cut, then graded (add foreign soil and rocks to level the plot) for construction. The environmental impact is “not just the removal of trees, which is already bad, but it is the destruction of the soil,” said Carson. Borrowing from The Soil is Alive by Mark Coyne, Carson says “The skin is the largest organ in the human body, and we cannot survive without it. In a similar way, the topsoil is the skin of the earth, without it the earth dies.” Regeneration of a deforested area is a complex process.  It is not a simple matter of planting new trees. Right now, after already clear-cutting roughly 20-30 acres of this forest (exact numbers not currently available), Blackhall Studios is requesting to clear-cut a second piece of land.

What happens when a forest is clear-cut and/or replaced with buildings?

Watersheds and wetlands are important parts of the ecosystem. This 2-minute video shows what happens as rainfall moves water toward a river.

Infrastructure made of nonporous concrete and unvegetated land can have detrimental effects on the surrounding watershed. The former Blackhall construction locations are in floodplains, located in close proximity to a wetland. This means that more water than usual is going to be passing through the area, both above and below ground. With the forest and fauna intact, the trees, roots, fungi, and other flora will act as a remarkable living sponge, “sucking up some of the water, and slowing the water flow, easing the impact on the landscape,” says Carson. Without living matter there is no natural “sponge” effect to slow the flow of water. This leads to faster water flow which leads to landscape erosion. This erosion then causes the destruction of even more plant life, resulting in even less flora, and the cycle of erosion spreads outward like a ripple in a pond.

As water flows through these damaged pieces of land in floodplains and erodes it, it becomes turbid by collecting unusually large amounts of dirt and sediment released by erosion. As a result, Intrenchment Creek itself, where this water flows into, will become turbid. This is something we often see in the Chattahoochee River as it passes near the city of Atlanta and looks murky.

Aside from looking dirty, turbidity has negative impacts on river and creek ecosystems. Turbid water is darker, retains more heat from sunlight, and becomes warmer, in the same way that wearing a dark shirt is hotter on a sunny day. Warmer creek water cannot hold as much oxygen. Combined, the increased heat and reduction of oxygen can result in the death of many native creatures living in turbid waters.

Excess flood water also brings along “excess nutrients”, which may sound like a good thing; however, changes are always risky for ecosystems and, in this case, excess nutrients often lead to algae blooms, which are unrestrained supergrowth of a single organism, taking over a whole ecosystem. This, again, can deplete the oxygen in the creek as the algae thrives, dominates, and decomposes. And again, decreased oxygen will harm the native ecosystem.

What will happen to the undeveloped land and the existing clear-cut land?

Great Park Conservancy mentions plans to turn the already cleared land into a community greenspace and to connect and repair existing nature trails. Community greenspace is a good thing, as it provides a space to spend time outdoors, exercise, and grow food, which are linked to better physical and emotional health. There is cause for concern. The greenspace will be created from the existing clear-cut land, which requires significant investment and regeneration and is not always successful.

Is the land there already protected?

Intrenchment Creek Park is supposed to be protected, the Trust for Public Land and the Arthur M. Blank Foundation gave the land for Intrenchment Creek Park to Dekalb county, specifying that the land “shall be used in perpetuity as park property”. In addition, the Atlanta City Council was committed, as recently as 2019, to the “Atlanta City Design: Nature” plan for the South River Forest. This is an ambitious project which would have labeled the Intrenchment Creek and surrounding regions as a “conservation corridor” protected from commercial or residential development. To allow private construction on this protected land could set an unfortunate precedent for the future of other protected and conservation lands in the Atlanta area.

Both the landswap and the construction of a public safety training complex would set bad environmental and social justice precedents. Auctioning off valuable public forest for private use and clear cutting for both public and private infrastructure near communities that are historically marginalized continues a tradition of environmental injustice. Locating dumps, power plants, and heavy infrastructure near marginalized communities has been shown to have detrimental economic, social, and health impacts. Currently, HB432, a proposed bill in the Georgia General Assembly, would require impact statements for just such development when in proximity to historically marginalized communities. Without detailed impact statements like those proposed in HB432, there is no way to know how the destruction of so much forest land, will effect the surrounding communities.

Atlanta has referred to itself with pride as a “city in the trees.” Take that advice and learn about Intrenchment Creek Park. @defendatlantaforest is posting on Instagram about informational events including learning about local mushrooms, watching movies in the forest, bonfires, hikes, music jams, skillshares and more.

Write your local representative and ask for more studies and public comment periods before clear cutting begins. State your opinion on bills such as HB432.

Was this article helpful?

Amy Sharma, PhD, is Executive Director of Science for Georgia. Dr. Sharma has worked in many aspects of the engineering field: Product Management at Predikto, spearheading the development of the big data vertical and managing a $1M annual Independent Research and Development (IRAD) program at GTRI, working as an Assistant Professor in Medical Physics at the University of Western Australia, working as an Assistant Program Manager for the National Science Foundation, receiving political and outreach training as a AAAS Science and Technology Policy Fellow, obtaining a PhD in Biomedical Engineering at Duke University, and designing hardware logic for advanced server microprocessors at IBM. Dr Sharma enjoys difficult challenges, jobs with overly long titles, communicating scientific and technical ideas to non-scientists, brewing her own beer, and smoking various foods.